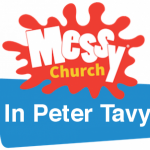 VE Day – Victory in Europe was proclaimed 75 years ago and is being celebrated tomorrow, so the theme this month is PEACE.

For some in the village they have experienced loved ones going to war more recently than 1945. But we are thankful that we have not been directly affected as people were in the First and second world wars.

We remember the horrific atrocities and the many millions of lives sacrificed so we can have our freedoms today.

Another way to handle this through words would be to change the word s-l-i-n-g (as one example of an old-fashioned weapon) into the word p-e-a-c-e by changing only one letter at a time but always making each time a new word. Instead of slinging insults at each other how do we bring peace between people?
Answer further on………….

Poppies are often seen in pictures and painting remembering the wars. They are used as a symbol for different reasons:

For Christians each Sunday is a Remembrance or victory day. It is the day when they remember the sacrifice of Jesus, who won for the entire world a different and deeper kind of peace. God’s peace gift to us is Jesus. He is God’s gift to all who will receive Him. Jesus makes peace with God for us and as we learn how to pass this gift on, we become peacemakers and peace-givers too. He empowers us to be peace-bringers.

From Matthew 5: 9
Blessed are the peacemakers, for they shall be called the sons of God.

From Micah 4: 1- 4
In days to come the mountain where the temple stands will be the highest one of all, towering above all the hills. Many nations will come streaming to it and their people will say, ‘Let us go up the Hill to the Lord, to the temple of Israel’s God. For he will teach us what he wants us to do; we will walk in the paths he has chosen. For the Lord’s teaching comes from Jerusalem; from Zion he speaks to his people.

He will settle disputes among the nations, among the great powers near and far. They will hammer their swords into ploughs and their spears into pruning knives. Nations will never again go to war, never prepare for battle again. Everyone will live in peace among his own vineyards and fig trees, and no one will make him afraid. The Lord Almighty has promised this.

Some people have taken this prophecy from the Old Testament about swords being turned into ploughs very literally. The country of Mozambique was torn apart by war for many years but in recent times, following an initiative that came from the Christian Church, people have been encouraged to bring in their weapons and have them melted down and turned into useful tools and machines. Some of these weapons have even been turned into pieces of art, which have been displayed in exhibitions around the world.

To illustrate this, hand out some long pieces of fuse wire to the children. Ask them first to sculpt them into swords or guns. Some will need little encouragement! The challenge then is to unbend the wire and turn those swords and guns into something useful or beautiful. This exercise could be used alongside the reading from Micah above to explore the promise of peace that is given us.

When Jesus came to Jerusalem for the last time it says in Luke’s gospel (Chapters 19: 42) that he not only wept over the city but also sighed and said ‘ If only you knew the things that really make peace ‘.

What things do make for peace between people?

list the sort of things that make peace rather than war.

Draw / sketch a large world map and lay this out. Talk about what sort of wars are going on today around the world. Identify the parts of the world where there is fighting, perhaps using some newspaper pictures and headlines to put on or against the map.

Now invite the group either to place some poppies on those different parts of the world and turn this into a short time of prayer, or make your own poppies cut from card and stuck to short gardens sticks. On each of the three main petals you could emphasise the different sorts of peace that Jesus brings – peace inside ourselves, peace between each other and peace with God.

There is a story that comes from the Middle East that is a sort of parable such as the ones that Jesus told. In fact I think it is really about Jesus himself and how he makes peace as well as about ourselves and how he wants us to be peacemakers.

You could make this story visual by printing off a series of 18 clip-art camel pictures and mounting them (first only 17 and then later add the 18th) upright in a slit along a long cardboard tube. This will help make the mathematics of the story easier to grasp! 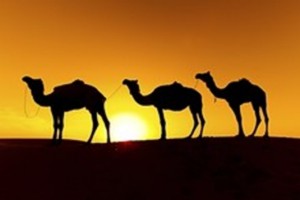 Once upon a time there was a rich man who lived in the deserts of the Middle East. You could tell how rich he was because of what he owned and especially how many camels belonged to him. In fact he was so rich that he owned not 2, not 4, not 8, not 16… but 17 camels.

He had led a peaceful and prosperous life and so when he was very old and near to death he wrote his will, explaining how he intended to leave his wealth to his only son, his grandson and to his one nephew. The terms of the will were these: one half of his riches should go to his own son; one third should go to his grandchild and one ninth of his wealth should go to his nephew.

This seemed fair. Soon after this the rich man died. Now when it came time to dividing up the camels according to the will, the three beneficiaries ran into a problem! (Demonstrate the following with your visual aid)

The three of them became frustrated and soon got very angry with each other. They shouted and quarrelled and argued and even threatened to go to war over the camels. Secretly they began stockpiling their weapons and plotting their battle campaigns.

Nearby there lived a very poor man. You could tell he was very poor because he only had one camel. Although he was so poor and seemed to have no influence, he still felt he should do something to help. He wanted to stop war breaking out. He wanted to be a peacemaker. But what could he do?

He decided to offer his one and only camel into the rich man’s inheritance to help sort out the problem. It was a huge sacrifice. The inheritance now consisted of 18 camels.
(demonstrate the following by adding a camel and then re-doing the maths as below!)

The three sat down and did the sums.

I wonder what you think this story is saying to us about making peace? And about Jesus who is described as the Prince of Peace

ANSWER to the SLING to PEACE Word Challenge:
Here’s one solution – sling-slang-slant-plant-plane-place-peace

1. Enjoy making and decorating a cake or buns with a British flag on it!

2. Arrange a happy picnic in the garden ( or sitting room floor!). If not many people in the family invite teddies, or make a scarecrow or two to join in the FUN!

3. Listen to songs from the second world war. ( Don’t forget there’s national singing at 9pm on Friday 8th May)

4. Make a medal out of salt dough that could be awarded to either
a)  those who through their ‘giving up’ of something are helping to keep us all safe. e.g. going to school; work etc….
OR
b) those who are still working to enable us to be safe, feed and cared for.

Please send in photos of what you make or do – email to contacthub@petertavyparishcouncil.org